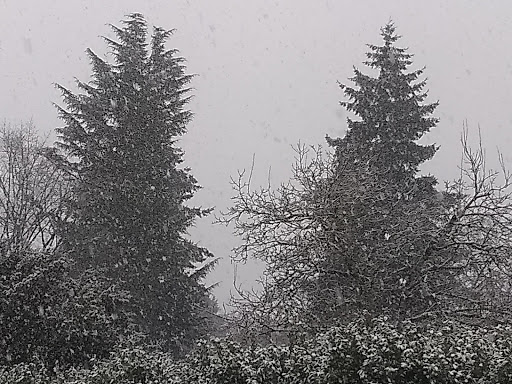 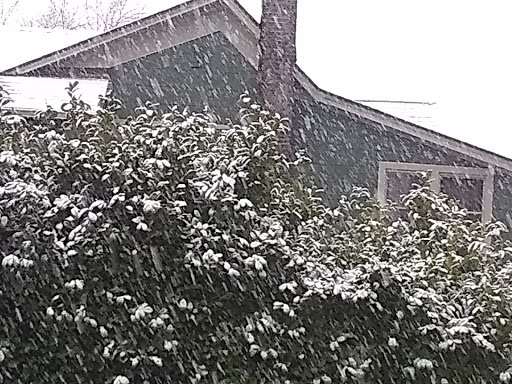 Posted by xianjiro at 14:26 No comments: 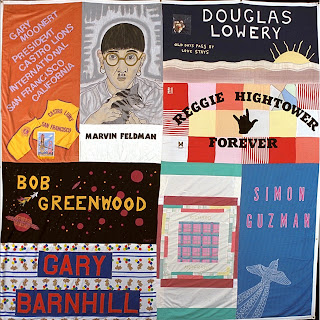 🎗Explore the panels online🎗
Posted by xianjiro at 12:22 No comments:

Waited until after twilight passed and took the dog for our after dinner stroll. We rode the elevator up to the top of a parking garage since it's probably the highest place I have access to and mostly gets me above the trees. The dog didn't care much for the elevator ride but that's probably because it was his first time. We had to maneuver around someone sleeping in whatever you would call the glass enclosure that protects the elevators. Didn't have any luck up finding the comet up there - might have been because I didn't know exactly where to look, but there was also a lot of light pollution between streetlights and the lights on the top of the parking structure.

A couple blocks to the north is a school with a couple blocks of sports fields. I wasn't sure if it would be worthwhile, but as we approached I saw a guy on the south side with two tripods set up. Bingo! It was pretty hard to pick out initially, but I saw what looked like a long, faint smudge, so I asked if I was looking in the right place. I was. He invited me to look through his binoculars and he showed a couple pix he'd grabbed. It was pretty cool and I'm glad I was able to see it.

We returned by the school nearest home but the view wasn't as good. Might have seen it there too, but it was really faint.

I really, really wish I had a place to go where I could enjoy the night sky. Can only see the brightest objects (like the big dipper or Jupiter or the ISS) from around here. If I wanted, I could walk for an hour or so ...

But then there's the walk back and it would be pretty late. Also, local highways lack sidewalks (even in the city). Gotta love ODOT.
Posted by xianjiro at 00:42 No comments:

cool NEOWISE video from the ISS

a bit of background on the vid
Posted by xianjiro at 13:12 No comments:

So, lots changes and yet so much stays the same.
Posted by xianjiro at 03:24 No comments:

Do you find movie reviews useful? If so, what kind - other than one's you agree with, of course?

I've given up reading about movies before watching them. Started the process some time ago and have completely given up. I prefer to watch a movie as 'cold' as possible. Yes, the heat is on or I'm under a blanket. By 'cold' I mean with virtually no knowledge of the film. I know the name, might know actors or director, and often know some general buzz about the film.

Okay, what's general buzz? For example, I know that Interstellar takes place in space. But that's

really all I can tell you about it. Oh, other than it's on a number of lists, either as a best or most popular film.

And this is where I now get 99.99% of my film recommendations. For years I've been working through such well-known lists as the IMDb Top 250, the National Film Registry (US), Ebert's Great Movies, Empire 500, the Criterion Collection and FilmMovement catalogs. But since I've seen so many of the titles on these lists, I continued to search for other lists until I came across I Check Movies. As of today, they have 162 Official Lists and thousands of others, compiled by members of the site.

While some of the Official Lists might seem obscure, say Amos Vogel's Film as a Subversive Art or Yle News' Best Finnish Films of All Time, especially if you're not in art house cinema or from Europe, and maybe even if you are - or are based on someone's opinion, Spike Lee's Essential Film List or Halliwell's Top 1000, all can be argued as having a rationale for inclusion or exclusion of a given title. One might not agree that Movie X is one of the Top 1000 movies of all time, but really, like most art, qualifying cinema is quite subjective.

And this brings me back to why I don't pay any attention to reviews. I mentioned the late Roger Ebert earlier. While I occasionally disagreed with him, his opinions were reasoned, based less on emotion, and he had decades in the film industry, most of which was spent reviewing films for the Chicago Sun Times or on the syndicated TV show At The Movies. There are others, and thanks to the wonder of the Internet, we can actually see what Jonathan Rosenbaum or AO Scott thought of a given film they reviewed back when. But do you really look up reviews before adding a movie to your Netflix cue? (I don't use Netflix - I prefer my local library.)

No, most people either rely on one of three things:
So just sorting through reviews takes time. Time I don't find very well spent. Occasionally I might read reviews after seeing a movie (sometimes even while watching it) to see if others have reacted in a similar fashion. Other than that, I don't find them useful at all.

What's a casual movie viewer to do?

Depends. If you think your time and money are being well-spent finding movies using your current method, keep doing it.

If not, then may I suggest finding a list of films that jibes with your interests. Like Martial Arts films? Check out Sohu.com's 100 Classic Martial Arts Films. Or maybe Cult movies are you thing. Try 500 Essential Cult Movies from the book by Jennifer Eiss et al or The New Cult Canon by Scott Tobias at the AV Club. There are probably almost as many lists of films as there are movies available online and on DVD.

Posted by xianjiro at 19:30 No comments:

Anyone who knows me knows I'm very much into something I called 'filmed entertainment.' Included in this expansive phrase are feature movies, short subject films, documentaries, TV series, made-for-TV movies, and TV mini-series. Of course I've watched all these things since I was a young kid; however; I grew more serious about cinema, especially international cinema, after 1995. My tastes run from popular TV programs to arthouse and experimental films.

In the early 2000's it was clear that I had to somehow keep track of what I've seen, what I want to see, and what I should see. After the fifth time I pulled the same item off the library shelf thinking hmmm, this looks interesting only to watch the first two minutes and think isn't this the one where he does....yeah, I've seen this already! So, I started tracking what I'd watched on IMDb and I also developed a very detailed, many paged spreadsheet. I rely on my spreadsheet so much now that I rarely walk up to the library shelf (other than their version of 'New Releases') -- I simply search for things on my various lists, place holds, and watch them as they arrive.

To date I have rated 5,995 titles on IMDb and have 6,222 items listed and 'seen' in my database. Why the difference in numbers? Well, 217 titlez in my spreadsheet aren't even cataloged in IMDb and even after downloading my IMDb data, comparing it to my spreadsheet, updating both, I still have managed to lose ten titles -- after completing my comparison the number was three, so roughly one title a month seems to fail to update on IMDb. Oh well.

Anyway, as I approach my 6,000 IMDb rated title, I thought it was time to provide some listings about something I seem to care so much about. To start off a series of posts, I decided to list all items I have rated 10 out 10 stars on IMDb. What does a 10 star rating mean? Are these the best movies of all time? Are they somehow the most important or simply my favorites? This is a very difficult question to answer mostly since there are no guidelines for how many stars one user assigns a movie. For instance, someone might give every movie with Ben Affleck in it a 10 and every movie with Matt Damon in it a 1 on principle. I have tried to develop a rating system that resembles how we were graded as students. In school, a C was considered average and minus a curve, a score of 70-79% (correct) was generally a C. This is where I start. I then add and subtract a star for things that stand out to me related to acting, cinematography, design, plot, stupidity, originality -- okay, I admit, it's a very inexact science. I also freely admit that my ratings are highly subjective and you will probably notice a difference between my rating and IMDb's weighted average.

One note, generally a really good/great movie will only score 9 stars on my rating -- to earn that tenth star, it has to have that something extra; it must move me emotionally. So, the movies and TV programs listed below are each examples of works that have touched me deeply.

I will make some more remarks over this series of posts related to ratings and such. Please, feel free to ask questions though I'm unlikely to 'discuss' (aka argue) a item's merits. If you haven't seen some of these movies and TV programs, I hope you will track them down. They may not touch you the same way they have touched me, but you'll see what does, in fact, touch me.

The Top 93 are not provided in an discernible order.

Posted by xianjiro at 03:34 No comments: